In solitary confinement behind the Iron Curtain of post-war Romania, Elsie’s only companions are two other prisoners she cannot touch or see, tortured like her for their beliefs. They tap out messages in Morse code, triggering memories from Elsie’s former life, especially her love affair before the war. Past and present collide as Elsie is forced to imagine a future without torture or faith.

Inspired by actual events, WE ARE THE BODY is a gripping tale of treachery and survival from Andrew Kooman*, playwright of SHE HAS A NAME.

In May 2015 WE ARE THE BODY premiered in Red Deer, Calgary and Saskatoon to critical acclaim.

WE ARE THE BODY is inspired by the history of Richard Wurmbrand and other prisoners of conscience who endured years confined in subterranean cells deprived of all sensory stimulation. Engage this vital conversation about the suffering of marginalized populations and the human right to freedom of thought, conscience and religion. Please note: the playwright intends to suggest and remember the valiant life of Wurmbrand through the character named Richard, but this play is by no means an historical or biographical account.

WE ARE THE BODY Poster – print resolution PDF 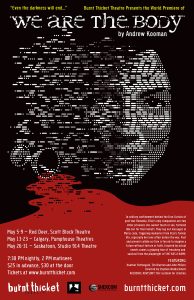 WE ARE THE BODY Poster – screen resolution JPG

WE ARE THE BODY Handbill 4up – print resolution PDF

WE ARE THE BODY ecard JPG 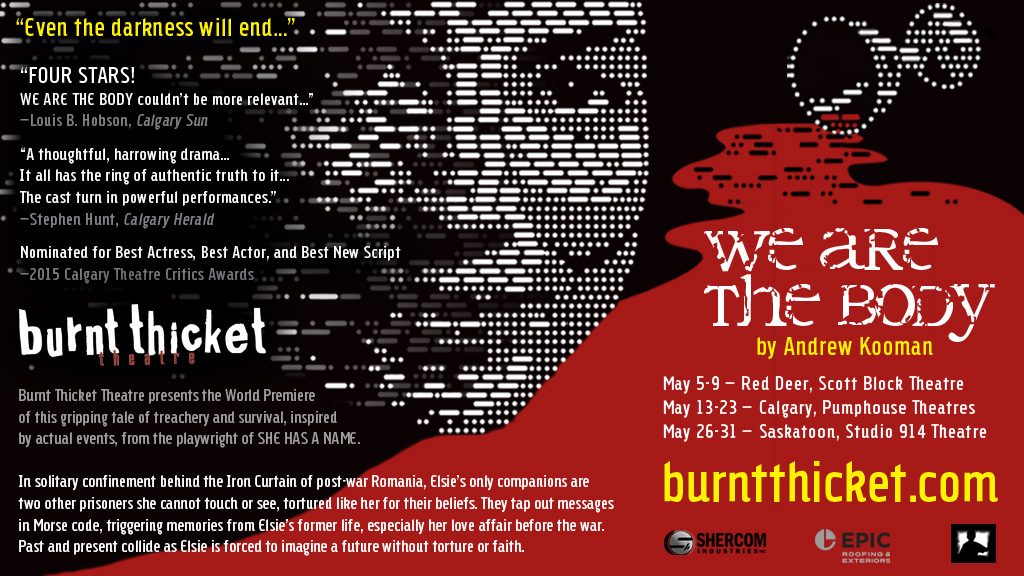 Critical Acclaim for We Are the Body

“Andrew Kooman’s [WE ARE THE BODY is a] thoughtful, harrowing drama.”

“It all has the ring of authentic truth to it… it feels real.”

“The cast… turn in powerful performances.”

“Pattengale… bestows a kind of spiritual ferocity in Elsie… Bratton’s Richard [is] a deeply spiritual man who seems determined not to give his captors the satisfaction of seeing him in anguish. As both Micah and the guard Petre, McIver delivers a strong, believable performance.”

“WE ARE THE BODY couldn’t be more relevant and unsettling.”

“McIver tears at the heartstrings.”

“Stephen Waldschmidt [directs] with such a creative hand.”

“Kooman’s writing is at its best… he gives his actors natural dialogue and authentic emotions.”

“McIver and Bratton… are so convincing in their multiple roles  it is as if there were seven not three people in the cast.”

“WE ARE THE BODY is a raw, challenging and inspiring exploration of a time in history which I believe is far too often overlooked.”

“Waldschmidt clearly has a way with actors – Bratton, McIver and Pattengale are all exceptional…. Pattengale, in particular, is outstanding.”

“WE ARE THE BODY speaks loudly and clearly to virtually any audience, because the story is on many levels universal…. It’s a sobering reminder of how precious life is, but also how precious freedom is that ultimately enriches and injects purpose into our lives.”

“The lyrical, intense script delivered an emotion-packed evening of theatre.”

WE ARE THE BODY is a “cohesive and well-written play…. There are no filters here. The three prisoners deliver stark dialogue directly to the audience, making for some powerful moments.”

“Kooman is a talented playwright, whose sparse, visceral dialogue can make viewers think and also hit them in the gut.”

“The play contains tremendous performances by the three-actor cast: Pattengale, as a young woman whose memories of her fiance Ionel help her survive imprisonment, but also torment her; Bratton, as a Jewish Christian convert and pastor who tries to keep up the spirits of his fellow prisoners; and McIver in the dual roles of a prisoner who wavers in his faith and a sadistic prison guard.”

WE ARE THE BODY Videos

Recent News for WE ARE THE BODY

Thank you to this production’s Corporate Sponsors: