Get Tickets & Details from Rosebud Theatre

Dad says she’s ‘done something stupid’. She finds it hard to be happy.

You start a list of everything brilliant about the world. Everything worth living for.

You leave it on her pillow. You know she’s read it because she’s corrected your spelling.

Twenty years and thousands of things later, the list will take on a life of its own. Be drawn in to an astonishingly funny comedy about depression and the lengths we go to for those we love.

An epic celebration of life’s joys in the midst of pain. 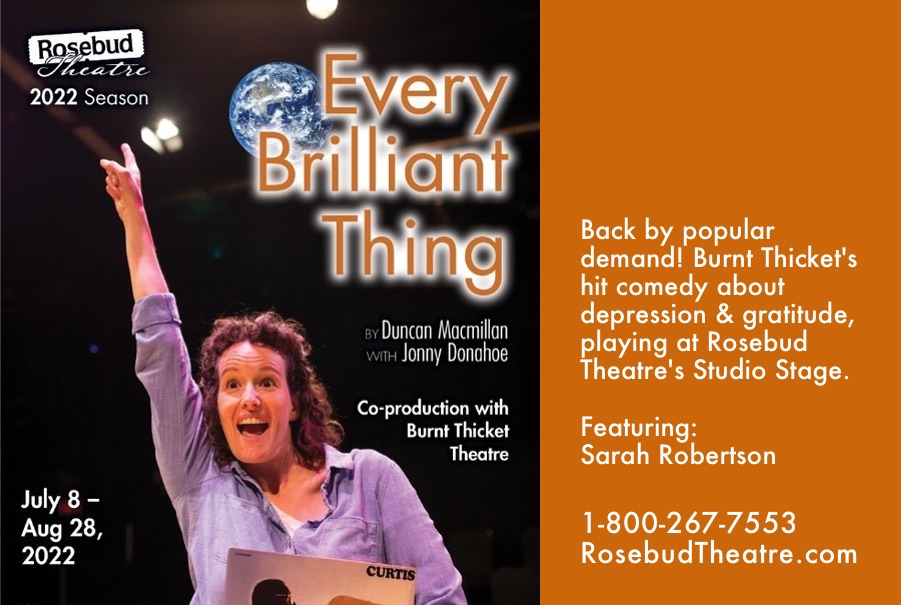 “Heart-wrenching, hilarious… one of the funniest plays you’ll ever see, full stop.” ★★★★ – The Guardian

“the funniest show about depression you’ve ever seen… [It’s] about finding reasons to live… And those reasons can be as minute as wearing a cape and as big as falling in love.” – New York Post

Buzz About Every Brilliant Thing

“I was blown away by the production and the performance… I hope you are selling out. You deserve to.”‬ –Louis B. Hobson, Calgary Herald theatre reviewer, in an email to BTT

“If you are in Calgary tonight, I can not more strongly recommend Every Brilliant Thing. Jenna-Lee M. Hyde gives a tour de force performance in a show unlike any you’ve ever seen. It’s a straight up hilarious and soul exposing ride. I don’t recommend shows lightly. Make time for this one. TRUST ME.” –Krista Marushy, Facebook post

“I go to a lot of theatre and this is in my top 5 of all time!! I have never felt so involved in a one person play and rarely have I seen a serious subject dealt with so well balancing humor, sentiment and sadness” –Joy R.

“All the very good things I’d heard about Every Brilliant Thing paled in comparison to what was actually going on in the theatre today… Jenna-Lee Hyde gave us the most generous, authentic experience of this story and through it, her true, evident care for and of us was truly heroic. She seemed to take each and every one of us by the hand, never with a sideward glance to anyone else, never hinting at a lack of confidence in us or in where she was taking us, and made each of us in that audience feel like one of the Brilliant things on the list.” –Brad G. Graham, Facebook post

“As both an actor / playwright and a Mental Health / Substance Abuse Worker I found the play to be very groundbreaking. It had a profound impact of drawing the audience into the story, while at the same time generously educating about mental health, primarily suicide. I loved the interaction with the audience, and watching how as the story unfolded and produced healing. The content was a heavy subject, yet the play didn’t traumatize instead it gave a beautiful dose of insight.” –Wanita Bird, Indigenous Cultural Support, Youth Resource Centre, Saskatchewan Health Authority, in an email to BTT

“Every Brilliant Thing @LiveFiveTheatre is brilliant — a play about depression that gives you one million reasons to be happy. One million and one: great performances in great plays. Go see it, this weekend or next.” –Rod Macpherson, Twitter post

“THANK YOU for encouraging me to go see this ‘show’… I hesitate to call it a show ‘cuz it was more like watching a live spontaneous sharing of thoughts, memories, with no feeling of it being memorized show lines. Quite extraordinary. My brain is thinking differently now. Yup, this one will change you.” –Diane I., Facebook comment

Jenna-Lee Hyde received a SATAward for Outstanding Leading Performance for her role in our 2018 Saskatchewan premiere production (presented by Live Five Theatre), which was also nominated for SATAwards for Outstanding Production & Outstanding Direction (by Stephen Waldschmidt).

Jenna-Lee is a Prairie born and raised actor living in Toronto. She has trained with theatre professionals from across Canada at The Second City in Toronto, the Banff Puppet Intensive, Globe Theatre’s Actor Conservatory, and the University of Saskatchewan where she received her BFA in Acting. Some recent credits: Our Town (Theatre Rusticle / Buddies in Bad Times Theatre), marry me, marry me, marry me, marry me (House + Body / Paprika Festival), Drowning Girls, The Secret Mask, (Globe Theatre), Farndale…Christmas Carol (Persephone Theatre), Much Ado About Nothing, Taming of the Shrew, and Romeo and Juliet (Shakespeare on the Saskatchewan). Her work can also be seen on Workin’ Moms (CBC), and the upcoming short film, Benched.

*Burnt Thicket Theatre engages under the terms of the INDIE 2.2, professional Artists who are members of Canadian Actors’ Equity Association.

“Live Five is focusing on mental health as it opens the curtain on its 15th season, presenting Burnt Thicket Theatre’s EVERY BRILLIANT THING.” –StarPhoenix article

“Show ‘the funniest thing about suicide and depression that you’ll ever see.’” –Saskatoon Express article